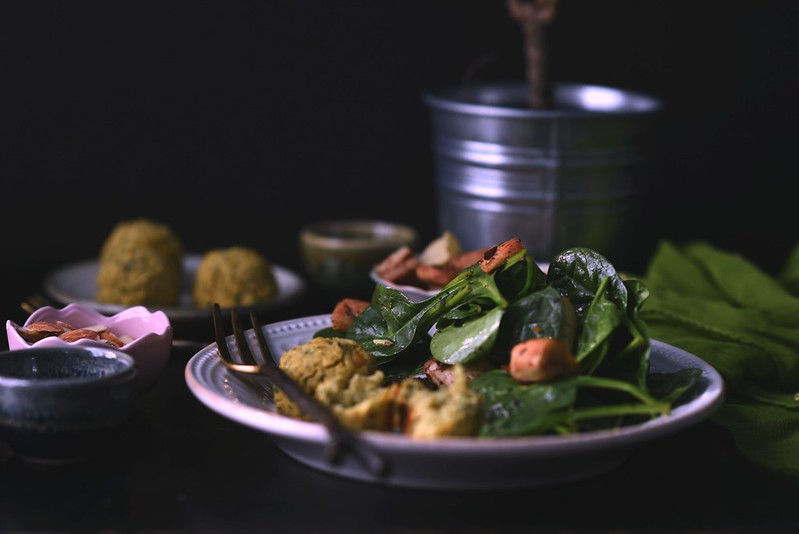 i’d say in the last 6 months or so
i’ve had a strong feeling
of lethargy.
not physically per se,
but like i’m tired of the grind.
i’m perfectly content to have cereal for dinner,
and more often than not
i’ll turn to dw
and say we’re eating out
or it’s his turn, again, to make something.
i still go through the motions of
being an adult:
menu plan
grocery shop
meal prep.
if i’m really good,
i might even blog about it.
i would say though,
butt-end of 2016 was cereal all day, err’day,
and repeats,
like this spinach salad that is so stupid good,
and some form of bean ball,
whichever i happen to grab from the pantry.
it’s not a hardship when ingredients are good
to begin with,
but it certainly does make for
a quieter food space. 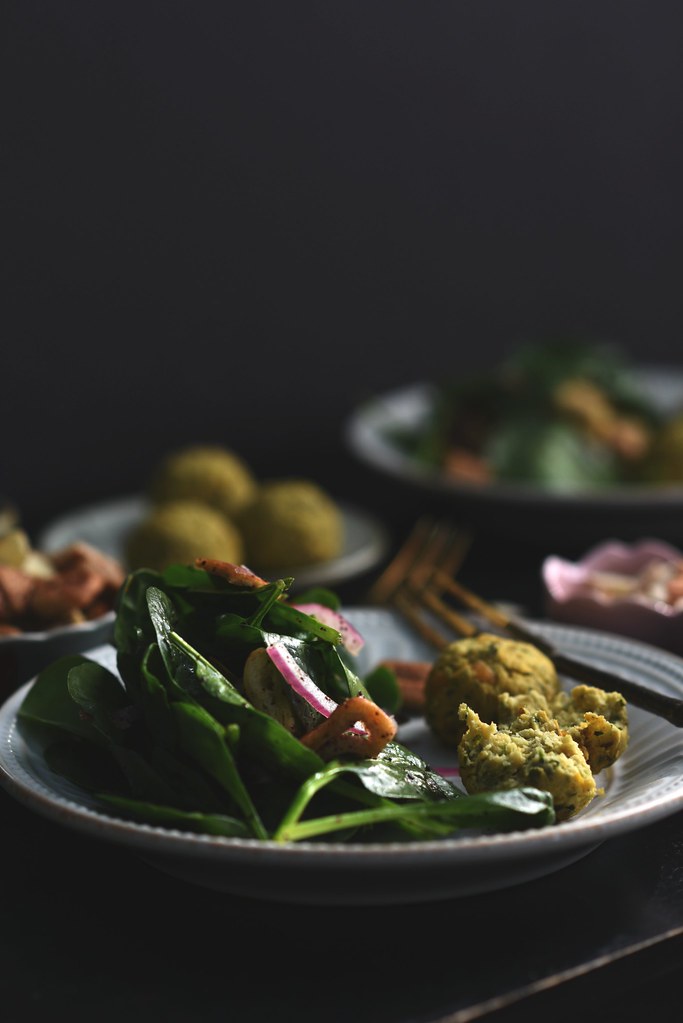 TL; DR:
i’m beat, i might drop off the face of the earth
cus all i eat is breakfast for dinner,
unless it’s this salad,
in which case, it’s dinner for breakfast. 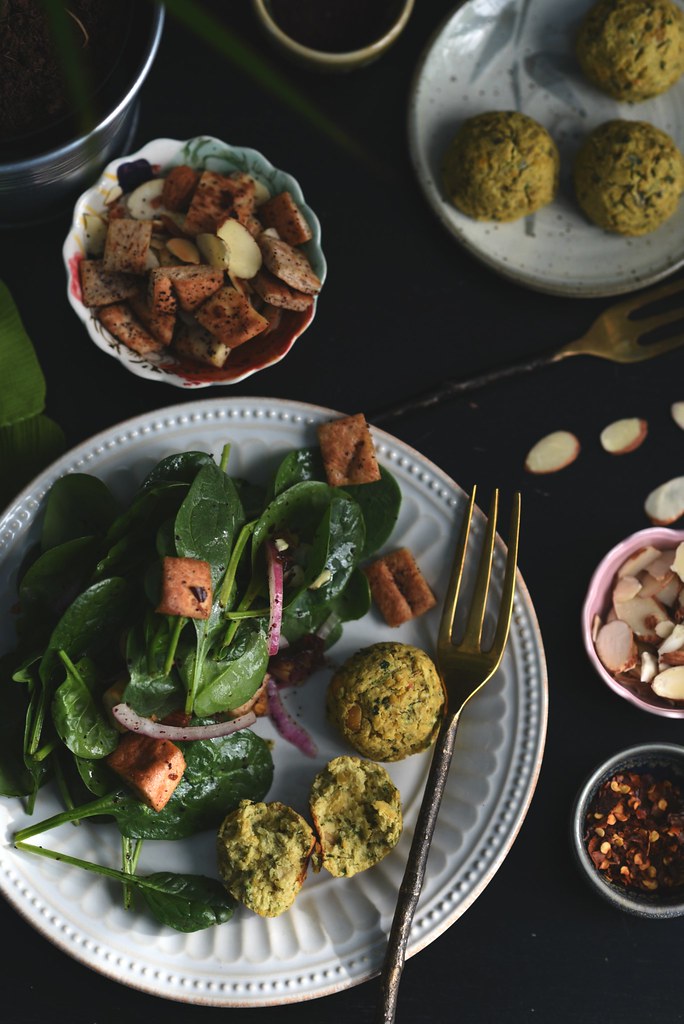 *note: we made this salad all autumn and it looks to be something we’ll be consuming all winter. i’ve used spinach, arugula, kale, or lettuce mix. my vinegar use is also spotty, sometimes it’s generic distilled white, other times it’s sherry vinegar and recently it’s been rice vinegar. i obviously have an issue with following recipes to the T. i also eyeball amounts of everything, because sometimes the fridge needs clearing or the meals needs to be stretched to the next day. it’s whatever tastes good, man.
**note: the butter can be omitted & double down on the olive oil, but if you’re able to consume it, or have access to lactose free butter, DO IT.
***note: the falafel balls are an added healthy protein option, though any meat or hard boiled egg would do. the salad is fine as a stand alone meal. i have taken to par-cooking or full on cooking the garbanzo beans before shaping. soaking is not enough and my stomach rebels if we skip the boiling part. besides, this method offers an almost creamy hummus-y like texture that’s quite pleasing.

in bowl, add the vinegar, onion slices and dates. throw in a pinch of salt and mix. set aside while you prepare the rest of the dish.

in a frying pan, heat up the butter & 1 TBL olive oil. aim for medium heat. add the pita pieces and cook until golden. this step can take up to 10 minutes sometimes, depending on how big the pieces end up being and how crunchy you want them to be. add in the almonds and mix well. take/turn off heat and add in the sumac & chili flakes and a pinch of salt. mix thoroughly.

to assemble, in a large mixing bowl add in the greens with the pita mix with the onion/date dressing, excess vinegar included. drizzle with an additional tablespoon of olive oil and lemon juice if using, and toss well.

cook garbanzo beans for about an 30-45 minutes, in the same soaking water. drain.

pre-heat oven at 350F and prep a baking sheet with parchment paper.

in a food processor, pulse the parsley, cilantro and onions. add in the cooked garbanzo beans, cumin and salt/pepper. pulse, you’re not making hummus, it’s a chunky texture that you’re aiming for, there might even be whole beans in there, you’re wanting the mixture to stick somewhat. add almond meal, 1 teaspoon at a time, until the mixture binds enough to make a ball.

using an ice cream scooper, scoop out a portion and rolling to a ball. put on baking sheet and continue.

bake for 20-30 minutes. if you think of it, turn the balls to brown all over. it’s not detrimental if you don’t.

remove from heat. can be eaten hot or at room temp. usually i drizzle bit of miso-tahini dressing, which doesn’t clash with the spinach salad dressing. 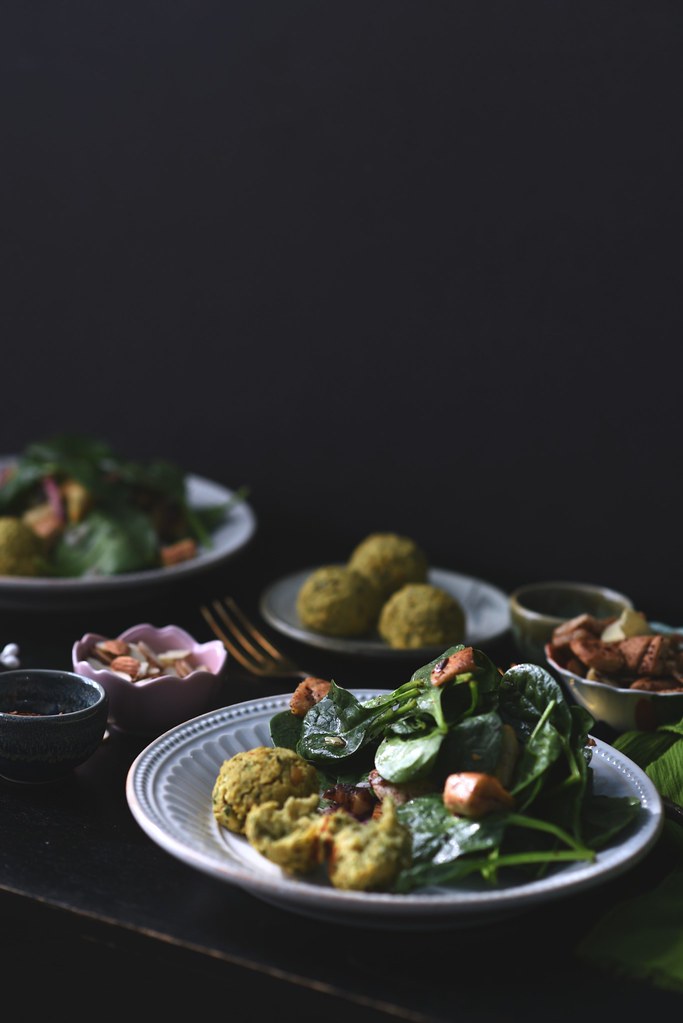