can you believe?
it’s the end of september
i’m a Mrs!
(thank you so much for putting up with all the wedding
related stuff this month!)
(um. i might have a few more posts,
most likely vendor info, photographs of the actual Day,
and gift ideas for all parties)

oh but this month nearly did me in:

saw … twilight in the country. dw & i roadtripped to southern virginia, i had to work and since it was in the area of my alma mater, i brought him along to see what i saw all those moons ago when i fell in love with the mountains
heard … moos. really. it was enchanting. i could’ve stood in that field for hours watching them
smelled … lavender. rosemary. licorice. my bouquet smelled so beautiful
tasted … red wine. my cup really runneth over with the stuff this month
commenced … crocheting in earnest. this has been on my to-make list forever

|| i’m dying to chop my locks but if can’t go full on pixie, i might have to do this
|| this might be my next arty farty project
|| gawd, this entire collection is gorgeous, i wish i could afford dvf
|| it’s cowl season!
|| excellent read: life divides into AMAZING ENJOYABLE TIMES and APPALLING EXPERIENCES THAT WILL MAKE FUTURE AMAZING ANECDOTES!

photo captions:
crocheted owl rattle – for a friend’s baby girl this autumn. i really did walk around for days after i completed this project, just shaking the shit out of it. i changed the pattern just a smidge, rather than doing the double crochet stitch, i used single crochet instead. also, i didn’t bother with the wings. i may have used a slightly bigger hook too. i purchased christmas-like bells so it’s not actually a rattler sound, and more like you know, reindeer on your rooftop type of sound.
blueberry citrus scones – i did bake this month, and fed dw breakfast. i swear. i adapted this recipe, from this recipe
sweet honey soda water – dw loves his soda water. i can’t remember what the exact ingredients were but this post has a couple of great options
gluten free blueberry donuts – i know. enough with the blueberries already. and i still have a bag in the freezer to use up. yeah. i don’t have a recipe for these gems. they were good though
soup dumplings (xiao long bao) – they weren’t perfect but i’m glad i tackled this project. now i know for sure to just hit up a dim sum joint for the real stuff. i adapted this recipe

and our unofficial song: love is all i am

i don’t know what inspired me
to make the wedding invitations
when it’s just as easy to
print them out on fancy schmancy paper
and call it a friggin day
but no
i took an online watercoloring class,
a class that i enjoyed
but ultimately did not use any
the techniques i learned
in the finished product
(dw says i like to sign up for things
and then kinda show up
halfheartedly,
and then deuce out)
maybe that’s why i went balls to the wall
with the diy stuff
to show him that i’m entering this
whole marriage thing
with all my heart

anyway,
i currently have an infatuation
with billy balls
lucky me they’re just fuzzy balls on a stem
which are easy enough to paint

i decided early on that i’m not much for the bulky-tissue-paper-and-confetti-in wedding invitations. for some people it works, for me, that’s just the sound of trees weeping

so, i wanted to keep the information concise and to the point, on a square shaped paper. most important info: date, location and a website with all the other information

dw & i worked on the wording, the location of the wording on the paper, leaving enough room on the left side for me to paint. i think we managed two invites per sheet of paper

i think i chose to ignore what i learned from the online class because i didn’t want to have to worry about color blending. i went with the simple orange-yellow hue with grey stems. i kept it to just 2-3 balls. tip: stenciling might be a good alternative, using colored pencils instead

dry the invites overnight, on a flat surface

all in all, this project took just a weekend to do, 12 hours of which spent for drying

y’all
the time is drawing dangerously near
for the next few weeks
i will be posting some crafts,
specifically diy things that
i worked on for the last 6 months
believe me when i tell you that:
it’s easy
it’s affordable
and most importantly
it’s personal

for the photograph used –
a tripod
camera – we used my dslr, but honestly, a p/s would work fine

how-to:
we chose a sunny day to snap the shot,
it may have taken us 30 minutes
the cellphones were blank, although we
did snap pictures of each other on them

choose a background that is neutral,
in our case, we opted for the brick wall of the condo building next door
and we’re standing on the fire escape
between the two buildings
the sun is at around 2:30pm so it’s not too harsh and not behind us
i stood dw in front of the camera
and had him raise his arm with cell in hand
i focused on the cell
set the timer
ran to stand next to him
10 seconds later, snap
repeat about 10x, or until bored

editting:
dw used photoshop to add the pic
of each of us onto the cellphone screen
i decided to go black/white with the photo we used
i used a random postcard making company,
i won’t tell you who, cus i ended up
cussing them out for bad service
you can google it or use a vendor you trust

scratch off supplies/how-to:
adapted from soda pop design who got it from martha stewart

on the back of the postcard, write up what you want
in my case, i decided to get fancy & do it up in calligraphy
i searched on youtube for tutorials
and then proceeded to doodle all the long day
to practice
stick the tape over the doodles,
make it as smooth as possible,
cus you’re painting over it

to paint, mix the dish soap + paint
(1:2 ratio, dish soap:paint)
paint over the tape,
a few coats will do
make sure the writing is not visible
allow to dry between coats

for postcards it’s difficult
to convey to the receiver that it’s a scratch off
but it was fun to hear from people who
couldn’t figure it out
and those who knew instantly what to do
in a card, a penny or coin can be included
in the envelope and most will know what is up

either way, it was a fun crafty project

there’s a line in
500 days of summer
that has stayed with me:
(ok, fine there are plenty of
lines from that movie that i still recall)
i just woke up one day and i knew.
(that was out of context, but
bear with me)
all i know is,
finally,
where i am right now,
right this second,
i’m fine with it
things that used to bug me,
things that i used to hide,

being anti-social:
i used to say i’m just shy
(i think that’s only part of it)
but what it boils down to is:
i don’t like people
it gets messy,
complicated
having an online identity is
not really like in Real Life identity
how i behave and talk is similar
but the similarity ends when i get
annoyed/tired/disenchanted/whatever adjective
at someone, i can easily turn off
my computer,
cite bad internet connection
use emoticons to ease a sting
whereas in person
my eyes usually glaze over,
my internal turmoil is written all over my face
and i have been known to get up,
mid-sentence, and leave,
awkwardness be damned
i’m ok that i’m odd like that,
for being introverted
big up to ISTJ peeps!

resting bitch face:
i have a natural resting bitch face
i don’t say that to make excuses,
or even to boast
i used to get reprimanded for looking mean
which would then turn my face
to astonishment
and predictably to Real Bitch Face
(no one wants that)
i’m ok that that is how my face is
if anyone else is not ok with it,
i’m ok with that too

trashy novels:
i like the stuff
i also like other stuff too
science fiction
action/thriller
young adult
adventure
i fall back on the fluff,
especially after a stressful book
or when i’m trying to not think
currently reading this awesomely awful ridiculousness
next: the fall of five (just one more week!)
i’m ok that i’m not big on
jane eyre
sylvia plath
reza aslan

and so, i let it go
like an ocean current
carrying away the sand
from my open palm

in the weeks of this summer
i’ve haunted the internet
for randoms, inspiration
most made their way onto pinterest
here are a few …

photo captions:
pickled mustard seeds – i’ve slathered this in sandwiches, it’s been added to salad dressings. i won’t lie, i’ve had spoonfuls of the stuff as is, it’s that good. i used regular white vinegar, added 5 whole cloves & 3 star anises.
quinoa veggie bibimbap – this has been made a few times, depending on what vegs we picked from the csa, so it varies each time. the sauce though, that’s the key. i adapted this recipe, minus the ground meat & corn syrup, switching out the asian pear for an apple once, and the most recent time, radishes.
hummus cake & asparagus ribbons with coconut yogurt – i veganized this recipe.
sour chicken + rice soup – i don’t remember, i think dw was sick and i made him eat this.
asparagus + poached eggs + fried capers – an adaptation of honestly yum’s recipe. my bff and kindergarten teacher have made this dish multiple times this summer. the fried capers were a revelation. 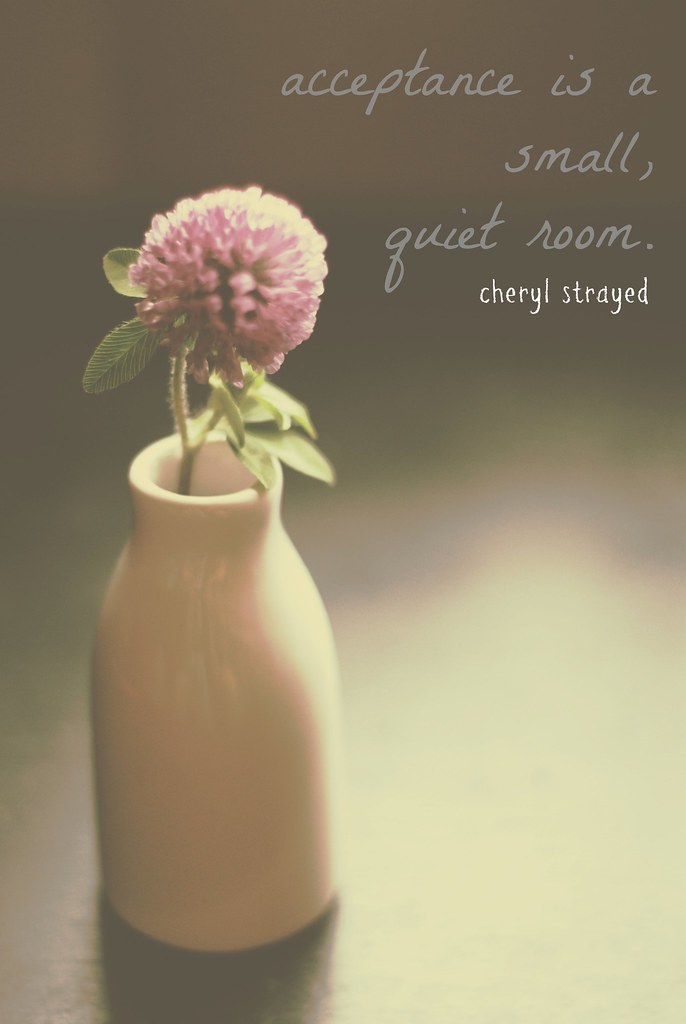 i recently finished
this book
she writes with such
compassion & conviction.
now i’m reading her
other book.
i’m not much for non-fiction
but this,
i can deal. 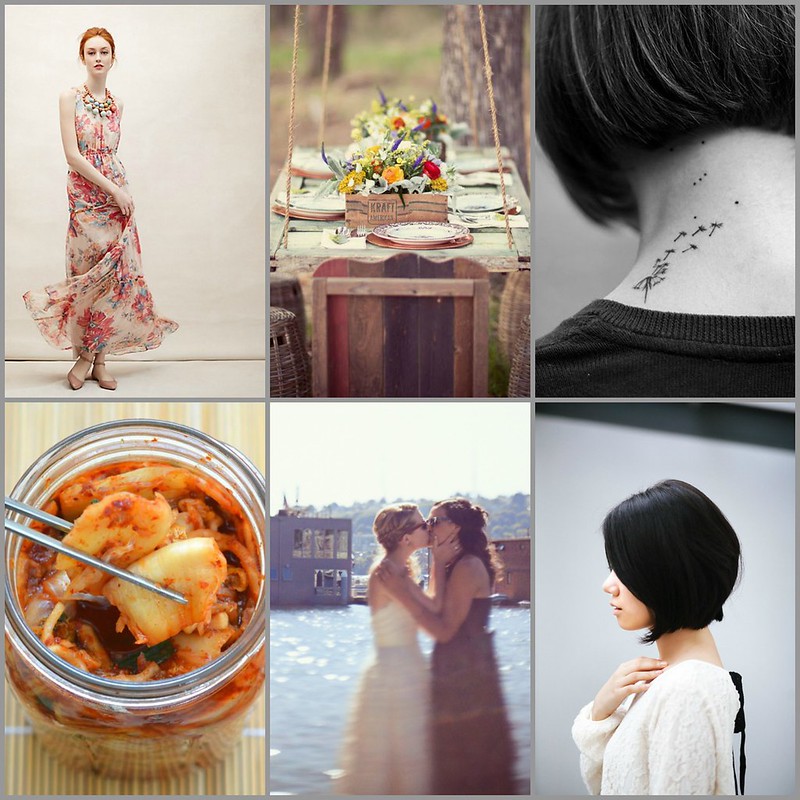 still looking for a reason to wear this dress :: lawd, i’d love to dine al fresco like this :: this ink is so beautiful :: i have kim chi on my mind :: finally. this country gets it right. One Love :: still dreaming about the shorter locks ::

there was a jaunt to a
free range, naturally fed
livestock ranch
some gathering
some laughing
some water play
some swooning
this is my life.
and i love it.
(you can follow along here)

other things:
a son of a holocaust buys german
oh, my alma mater … no words
i’m not excusing her, but you know, get over it people
no lie, matt nathanson can do no wrong.
bff has an official fb page, she’s making our wedding cakes
as a former yearbook editor, i would not have caught this
saw World War Z, so far, best summer movie
i’m hoping to bust this out soonish

have a wonderful week friends,
enjoy the holiday,
be safe,
be good.